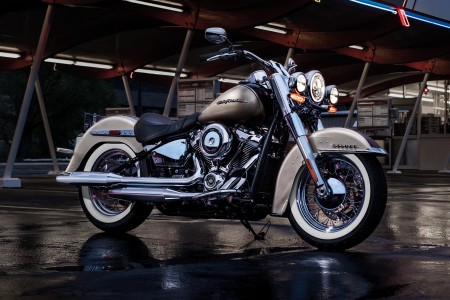 Harley didn’t have to change too much to make a dynamic new design out of the Fat Boy 114—all they did was make every glorious feature of the base Softail look even bigger. That means more aggressive styling, an attitude that doesn’t take “no” for an answer, and some of the most intimidating features you’ll ever see on the road. Solid-disc wheels and a wider back end make this bike easier on the eyes, but that broader stance also gives you more control and even improved power. Not to mention, the 2018 Fat Boy has trimmed 31 pounds off of last year’s model, so even though it’s huge, it’s got more kick than you’ll know what to do with.

The Harley-Davidson® Heritage Classic has always been cast in chrome as a nod to the original ‘50s styling—until now, that is. The release of the 2018 Heritage Classic 114 brings you a bike unlike anything you’ve seen before. It keeps the history alive, but revitalizes it with a darker style and contemporary finishes, linking past and present together. And with a lighter weight and small saddlebags, it’ll move you around quickly whether you want it for touring, short trips, or daily commutes.

Harley-Davidson has always kept one foot in tradition, but with the new custom revolution, they’ve only turned up their commitment to the classics with the Softail® Deluxe model. This motorcycle comes equipped with vintage white wall tires, spoke wheels, swept fenders, and a bit of chrome to put the finishing touches on that timeless design. It also has a lighter frame and the revitalized Milwaukee-Eight® 107 engine, which means better control for you, and an added boost to horsepower and torque.

The Softail Slim is a modern take on a classic bobber styling, enhancing the look with a slim frame, chopped down fenders, and a stripped-down look that carries nothing but attitude and an eye for the practical. Since it’s been chopped and trimmed down so much, this motorcycles performs better than just about anything else on the road, including improved turning angles, a stiff chassis for easier control, and a drop in weight of 35 pounds.

The Harley-Davidson® Breakout 114 brings a whole new dimension to the meaning of “hog.” Its double spoke wheels, 240mm tire, and custom engine displacement turn up the dial on power, style, and overall performance capability, making it a force to be reckoned with on any road.

The Harley-Davidson® Fat Bob 114 isn’t afraid of anything. The new suspension means you’ll be comfortable no matter how rough the road. A bigger MIlwaukee-Eight® 114 V-Twin engine generates more torque and horsepower than you’ll ever need to come out in front. And the styling is elegant enough to send other riders cowering off in embarrassment. It really performs, feels, and looks that good.

At a certain point, there has to be a bike that truly embodies American muscle. That means standing out, not just from a lineup of any old motorcycle, but even in a group of other muscle bikes. The new Harley-Davidson® Street Bob is just that, as it features more distinct styling than you’ll find anywhere else on the road, including classic wire spoke wheels, a sleek Milwaukee-Eight® 107 engine, and of course, blacked-out designs throughout.

An homage to ‘70s styling, the Harley-Davidson® Low Rider is a Dyna turned Softail, and the transition has been smoother than you might think. It’s built on the narrower frame, with that rear suspension tucked under the fender to preserve that “hardtail” look, but still features everything you’ve always loved about the Low Rider. Just look at the dual chrome exhaust, graphics that nod to the ‘70s look, and paired with increased power to make your ride stronger than ever before.

Harley-Davidson has redefined what a motorcycle can be with these new 2018 Softail models, so don’t hesitate to come in and take one for a test ride.