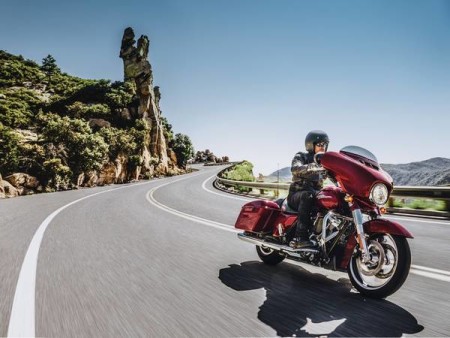 America is known for its big, powerful motorcycles, but not all American muscle bikes are the same. The two main classifications of American muscle motorcycles are cruisers and touring bikes, and they’re meant for different types of riding. Harley-Davidson® has continuously led the pack in both groups, and today they offer motorcycles that offer more power, style, and features than you’ve seen on just one bike before. Read on to learn about what type of muscle bike might be best for you.

Stop by Abernathy’s Harley-Davidson® if you want to see the best cruisers and touring motorcycles from Harley-Davidson®. We’re located in Union City, Tennessee, and we proudly serve the areas of Jackson, Paducah, and Cape Girardeau, Tennessee.

Advantages of a Cruiser

Cruisers are big, powerful motorcycles that stand out from the crowd. Sometimes referred to as “baggers,” these bikes can be ridden for long weekend rides or for quick trips around town. They really shine when you’re looking to make a statement with your motorcycle.

Cruisers are meant to be eye-catching. Like American hot rod cars, they’re big, sexy, and excel at head-turning acceleration on straightaways. Whether you prefer chrome, blacked out anodized aluminum, powder coating, or anything else, these bikes make a statement with their paint and finishing. They can feature things like ape hanger handlebars that aren’t particularly practical but look really, really cool. On a cruiser, it’s always acceptable to sacrifice a little bit of performance for great looks.

As we said before, cruisers are big and powerful. Their large chassis can accommodate an enormous engine in just about whatever configuration you like. Many cruiser engines easily surpass the 1,000 cc mark, which gives them plenty of raw power. They’re hard to beat on long, open roads. While older models featured air-cooled engines, today many engines are liquid-cooled to avoid performance issues. This tends to keep them from being as fuel efficient as some types of bikes, but for fans of power, it’s hard to argue with a cruiser’s brute power.

Cruisers have long provided the perfect platform for customization. Their big air-cooled engines have historically been easy to work on. They look great with different styles of handlebars, fuel tanks, and fenders. Everything from the front forks to the rims and tires can be changed out for something different depending on your preference. And because they aren’t generally loaded down with pragmatic but boring accessories, cruisers can offer an almost architectural appeal that gets to the pure essence of what a motorcycle should look like.

Advantages of a Touring Bike

Touring bikes are meant for one thing: taking trips. Too big to make for nimble, fuel-efficient commuter bikes, and too practical to appeal to the gear heads who slave over every line of the bike’s design, these bikes aren’t for everyone. But if you’re out on a long trip, there’s absolutely no other bike that comes even close to offering what a touring motorcycle offers in terms of comfort, amenities, and performance.

Because touring bikes are meant for the open road, they need to be able to carry enough equipment for the rider. The storage components on touring bikes can include things like saddlebags, top-mount boxes, and reach in compartments included in the frame. On other motorcycles, it’s always a battle to see how much weight and bulk you can cut from your saddlebags or backpack to make things more comfortable. But on a touring bike, you can take some of those extra belongings that make life more comfortable.

If you’re going to be spending several hours a day on your motorcycle, you’ll get to the point where stylish but impractical features start to annoy you. Who wants to have all the blood run out of their hands as they hang onto ape hanger handlebars? Who wants to have their butt fall asleep after 45 minutes on a thin, stiff seat? Touring bikes offer comfy seats, backrests, ergonomic riding positions, and low-vibration frames. This makes your ride comfortable, no matter the length.

Touring bikes also make it comfy to bring along a friend on your trip. While it’s possible to throw someone on the back of any bike and simply tell them to hold on, many touring bikes are designed with a secondary seat and foot pedals. If you’re going to be out for days or weeks instead of hours, having some company to share the ride with you makes things much more fun.