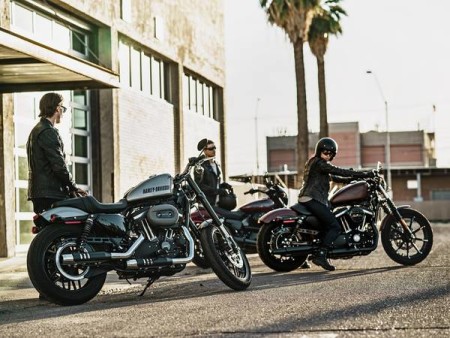 One of the best parts of motorcycle ownership is customizing your ride to fit your style and needs. Harley-Davidson’s Sportster® has become a legend for this exact reason. Originally designed to bring a middleweight bike to the American market, the Sportster® was released in 1957 and was quickly adopted by many different groups, including dirt track racers, bobber enthusiasts, and even cafe racer owners. When you want a motorcycle with a heritage of excellent performance under a number of configurations, you can’t do much better than the Sportster®.

When you want to see the latest Sportster®, stop by Abernathy’s Harley-Davidson®. Our Union City, Tennessee location proudly serves that areas of Jackson, Paducah, and Cape Girardeau, Tennessee.

Upgrades to Fit Your Size

Most motorcycle enthusiasts know that the Sportster® is an amazing bike, but depending on your individual size, it might not seem like the bike for you. Harley-Davidson® addressed this problem by creating kits to help adapt the Sportster to people of different sizes. For those of above-average height, the Tallboy setup works wonders so that you don’t have to spend your time curled up and hunched over. Tallboy Handlebars offer extension to keep your posture as natural as possible. The Tallboy seat boosts you up a little bit so your legs can sit at a comfortable angle that doesn’t strain your knees. A foot peg extender will allow you to kick your feet forward, too, meaning your legs will have a natural, ergonomic angle at all times.

When it comes to upgrades, Harley-Davidson® has your back. As the longest running of Harley-Davidson’s motorcycle lines (not to mention one of the longest continuously running motorcycle lines in the world) the engineers have had plenty of time to tweak, experiment, and refine the design of the engine to be able to provide spectacular power. This extends to upgrade parts which Harley® offers to get absolute power and fuel efficiency out of every engine.

If you’re opting for a brand new Sportster®, Harley® offers a wide range of improvements with their Screamin’ Eagle® performance parts. Engine upgrades come in four stages that each offer a new level of power and performance. Whether you want to keep it modest with a new Screamin’ Eagle® Heavy Breather Performance Air Filter, or go full on with a new bored-out Milwaukee-Eight™ block, these parts will take your Sportster® to the next level.

In addition to all the amazing performance modifications available, there’s also a broad selection of upgrades to take your style to the next level. Getting your bike’s style tuned in can take quite a while if you plan on upgrading it yourself. It’s not always easy to combine parts together but for true gearheads, that’s part of the fun! One effective way to create an awesome look for your bike is to choose a specific style of bike and choose parts to fit it. If you want more of a scrambler look, add knobby tires, a Screamin’ Eagle® Buckshot Exhaust, and some straight handlebars. For a chopper look, go for some big ape hanger handlebars, longer front forks, and some chopped fenders. Whatever look you choose, you’ll likely find that the Sportster® is the perfect platform to pull it off.