Home › Blog › How to Handle Threats on the Road 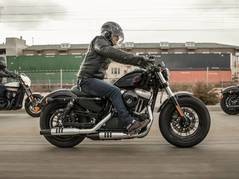 As you ride your motorcycle, you often face two big threats: other people and animals. Both can cause dangerous collisions or accidents. You can't prevent encountering them, but you can take proactive steps to reduce your chances and make an encounter safer. The staff here at Abernathy’s Harley-Davidson® in Union City have rounded up the top tips for handling threats on the road below.

It's unfortunate, but plenty of people drive with impaired focus. They could be under the influences of substances or trying to multitask (such as eating or texting while driving) or even driving while drowsy. Whatever their situation, it results in lowered focus which increases safety threats. There are a few ways you can manage this risk while you ride.

If you spot a distracted driver, do your best to steer clear. Change lanes, pass them, do whatever you can to put plenty of distance between you two. A distracted driver could easily hit you or slam on their brakes so fast that you hit them. Stay away! Here are some of the signs to watch for:

You'll need to compensate for the lack of attention other motorists are paying to the road by upping your awareness. Implement every defensive driving tactic in the book. They may suddenly slam on their brakes because they glance up from their phones and notice the light turned red. If you leave plenty of space between you and other cars, you'll have plenty of time to stop without a collision. Be aware of riding in other motorists' blind spots and try to steer clear as much as possible. A distracted driver could all too easily not notice you are there and veer into you, thinking they are in the clear to change lanes or turn.

You'll also want to be aware of traffic flow. For example, cars on the freeway will often try to cross several lanes to make the upcoming exit that they were too distracted to notice in advance. See if you can position yourself safely away from upcoming exits to keep yourself out of the cars' hurried exit path. The goal is to try to predict where cars will be headed so you can steer clear of them.

It's easy to get heated, frustrated, or angry at a motorist's utter disregard for the safety of others on the road. But giving in to road rage towards a distracted driver only serves to compromise your judgment and put you at risk. Focus on your own driving and let others’ poor decisions roll off your shoulders.

People aren't the only threat on the road. Animals can come out of nowhere and cause severe damage to you or your vehicle. Here are a few ways you can protect yourself.

When you know which times animals are more likely to be active, you can know when to be on your guard against an animal darting into your path on the road. Deer, for example, will be on the move the most in October, November, and December. They are most likely to come out between dusk and midnight since they hide from predators throughout the day. Figure out what types of animals will be near your trails and find out what times they might pose the biggest threat. You can also keep an eye out for animal crossing signs and be cautious in those areas.

As you ride, you may notice one animal and safely avoid it. But you aren't out of the woods yet! Many prey animals, such as deer, will travel together. There's safety in numbers, after all. If you spot one of these animals on the road, be on high alert. Odds are, there are more waiting in the bushes nearby and they could easily dart out into the road.

Defensive driving tactics apply for animal obstacles in addition to human situations. You'll want to ride as if you expect to see an animal. Always cover the front brake as you ride so that you can be ready to stop your motorcycle at a moment's notice. Practice quick stopping so that you can get a feel for it and be better able to respond when you’re in the moment.

As you ride, play the "What would I do?” game. Ask yourself, "What would I do right now if an animal came into my path?" to come up with responses to that scenario. Use high beams whenever you can to improve your ability to spot an animal. Drive more slowly, too. It's better to hit an animal at a lower speed than a higher one. Do what you can to stay alert and ready to respond to an animal in your path.

We hope you found our guide helpful! For all your motorcycle needs, visit Abernathy’s Harley-Davidson in Union City, Tennessee. We proudly serve those near Jackson, Paducah and Cape Girardeau, Tennessee.